The General Conference of the Methodist Episcopal Church, South. Convened in Nashville, Tennessee, on the First Day of May 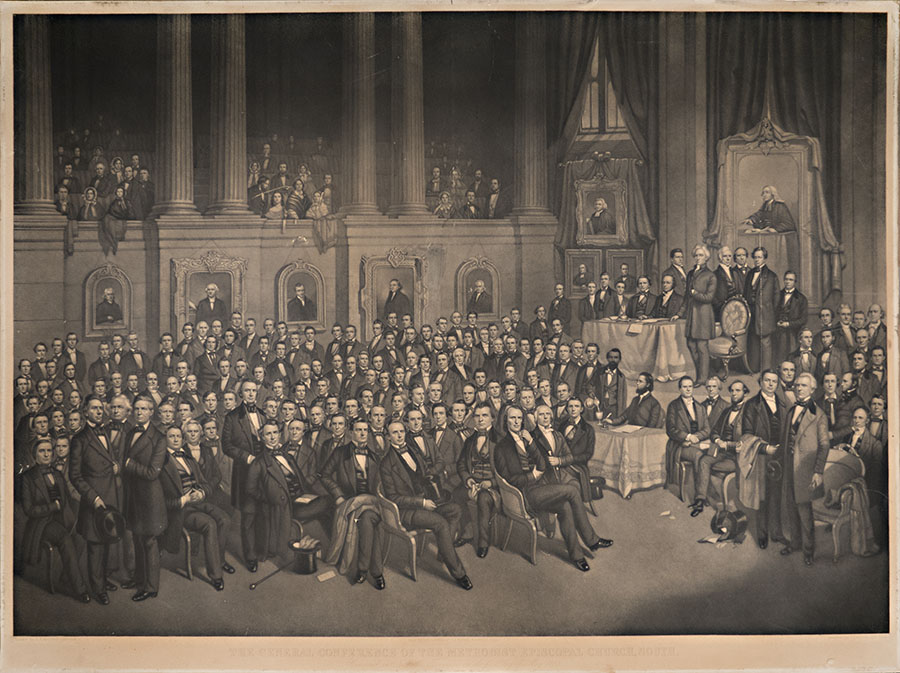 This is a large engraving depicting the Fourth General Conference of the Methodist Episcopal Church, South held in the Hall of Representatives of the Capitol of Tennessee in Nashville on May 1, 1858. It was during this convention that the idea of building a Methodist university in the South was first solidified. In the foreground at right you can see Holland McTyeire himself. The print on display is a small-scale reproduction of this extraordinary piece.

At the time of the convention, the State Capitol building was still under construction, which made attendance a special and historical opportunity. To commemorate this occasion, many steel engravings were made. Included with the print is a key listing the names of all of the delegates in attendance. The artwork was created by the eminent New York artist, Albert Fitch Bellows.

General Conferences were incredibly important events that lasted for an entire month. At this congregation, over 151 delegates, in addition to bishops, came to represent all of the southern states except for Maryland and Delaware.

Interesting to note is the depiction of John Wesley, the founder of the Methodist Church (back far left). Although he passed away in 1791, long before this convention, the artist wanted to show that he was still present in spirit. Another figure of interest is an African American porter who is shown serving the man seated at the table. His name was one of the few not included in the key, instead he was listed simply as “porter.” Thus little is known about his life or significance. However, according to the book “History of the Tennessee Conference” written by Cullen T. Carter, this was an old man and a preacher who in 1811 often visited the Nashville Methodist Preacher’s Meeting.

Duties of Christian Masters to their Servants »